Montreal, QC – September 13, 2017 – Via Science, Inc. accepted Startup Canada’s 2017 Innovation Award for the Quebec region. This award saw a highly competitive pool of candidates, due in large part to Quebec’s recent emergence as an innovation hub.

The award recognized Via Science’s leadership in using artificial intelligence to solve large-scale, high-stakes challenges across critical infrastructure, particularly in the energy industry. As a regional winner, Via Science will advance to the national awards, which will be announced during the Grand Finale in October.

Patrick Harrison of Intuit QuickBooks presented Via Science with the award and remarked that there was a “parallel between what [Via Science] does and what Intuit does on a daily basis, and that is that we try and use analytics, power of the cloud, and AI to help businesses make more informed decisions”.

In February, Via Science was a finalist for Techvibes’ Canadian Startup Awards Technology Innovation award. 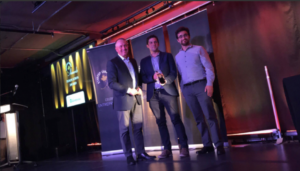 About Via Science
Via Science creates software applications that identify and prioritize risks to critical infrastructure using a combination of artificial intelligence, high-performance computing, and causal analytics. Headquartered in Somerville, Massachusetts, Via Science has developed its risk assessment algorithms in conjunction with some of the world’s leading companies and government agencies in energy and security. The company has been featured in Wired Magazine, The Wall Street Journal, and Forbes for its expertise in causal analytics software applications. For more information, please visit www.viascience.com.

About Startup Canada
Startup Canada is the leading national social enterprise supporting and giving a voice to entrepreneurs through online programs, national awards, flagship events, partnerships with private sector and government to foster a community for startup and small business success across the country. Learn more at www.startupcan.ca.

https://www.solvewithvia.com/wp-content/uploads/2017/09/logoideas-04-final-01.png 900 900 Laura Montorio /wp-content/uploads/2018/02/VIA-Logo-header-300x101.png Laura Montorio2017-09-13 15:17:582022-03-16 10:30:18Via Science Wins Startup Canada's Innovation Award for Quebec Region
Scroll to top
We use cookies on our website to give you the most relevant experience by remembering your preferences and repeat visits. By clicking “Accept All”, you consent to the use of ALL the cookies.
Accept All
Manage consent