To keep your lights on, the electric grid runs on one simple principle: power generation must be greater than power consumption.

While simple in principle, this is a challenge in practice. Consider the following headlines from the past 30 days: 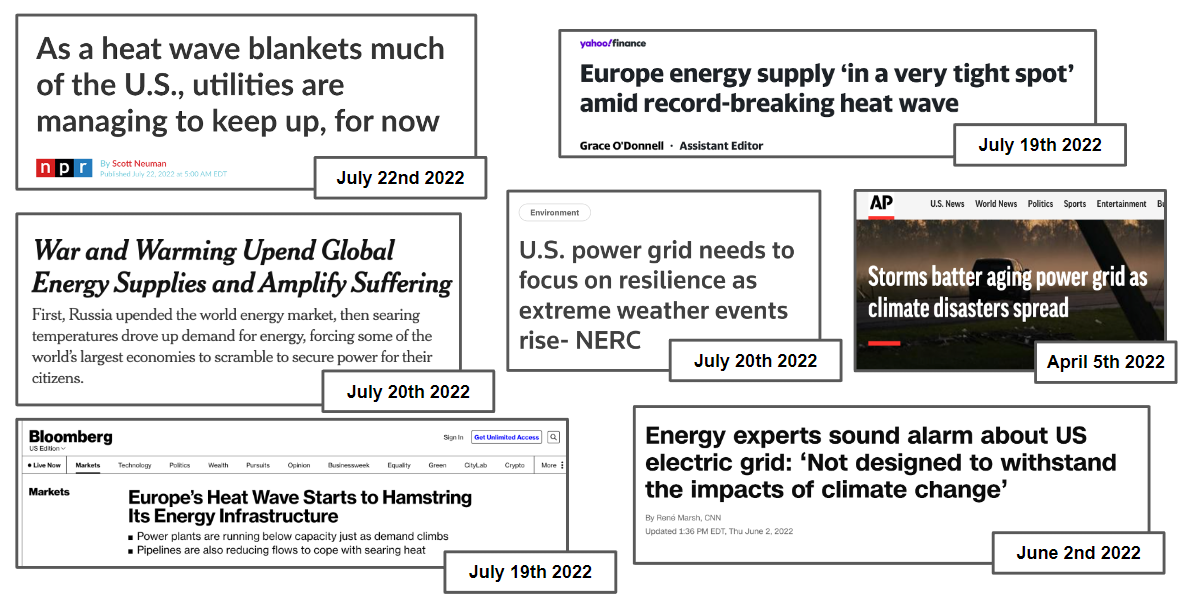 Power is experiencing a perfect storm that’s impacting consumers the most (high prices and blackouts1). The challenges are global, although with regional variations.

In Europe, sanctions against Russia are limiting fuel supply that has led to fuel shortages, price spikes, and, worst of all, outages2. Compounding the supply issues is an aging generation and grid infrastructure. For example, France, normally self-sufficient or a net exporter of power, has 31 of its 57 nuclear power plants shut down due to unexpected maintenance3. This hits at a time when Europe and the U.S. are facing record heat waves45. As air conditioning is not as widespread in Europe, the bigger concern is that in a severe winter, when energy consumption generally doubles, outages will be even more widespread67.

In the U.S., sanctions against Russia have increased fuel prices but have not impacted supply directly. What’s more problematic is that while solar and wind generation is on the rise, connecting the power to the grid is slow, sometimes taking over a year, due to regulatory reviews and backlogs or the lack of energy capacity8. An aging infrastructure is also struggling to keep up with electrification. This is already having an impact in both New York and Texas as heat waves in the U.S. have been record breaking in temperature and duration.

To solve for this, many utilities are engaging their customers directly. The idea is that when consumers lower their electricity usage, they keep demand lower than supply. While many traditional businesses have done everything in their power to build a direct relationship with their customers, most consumers only know their utility through their monthly bill and when the lights go out.

You’ll have seen some of VIA’s tech stack already demonstrate some of this functionality through our blogs. In the coming weeks, we’ll be talking more about how VIA can provide a turn-key solution to power providers and grid operators.

1. Unprecedented Heat and Stressed Grids Make Dangerous Power Outages Increasingly Likely | Huffpost
2. War and Warming Upend Global Energy Supplies and Amplify Suffering | NY Times
3. Paris Faces an Even Colder, Darker Winter Than Berlin | The Washington Post
4. Europe energy supply ‘in a very tight spot’ amid record-breaking heat wave | Yahoo
5. US Sets Record for High Overnight Temperatures in July, Giving Little Relief to Hot Days | Time
6. Climate change: Drought highlights dangers for electricity supplies | BBC
7. European Heatwave Could Threaten UK Electricity Supplies | Engineering and Technology
8. Energy experts sound alarm about US electric grid: ‘Not designed to withstand the impacts of climate change’ | CNN
https://www.solvewithvia.com/wp-content/uploads/2022/08/8.25-Urgent-need-graphic.jpg 2613 5000 via /wp-content/uploads/2018/02/VIA-Logo-header-300x101.png via2022-08-25 08:00:362022-08-25 09:48:06War, weather, and waning infrastructure: The urgent need for community-led grid resiliency
Scroll to top
We use cookies on our website to give you the most relevant experience by remembering your preferences and repeat visits. By clicking “Accept”, you consent to the use of ALL the cookies.
Do not sell my personal information.
Cookie SettingsAccept
Manage consent