SOMERVILLE, Mass., November 4, 2021  — VIA, the leading provider of artificial intelligence (AI) for data privacy, integration, and analysis, announced today that the United States Air Force (U.S. Air Force) awarded the company a new contract with Tyndall Air Force Base (Tyndall AFB). The contract was a result of VIA participating in the Revolutionizing Flightline Operations Challenge run by the U.S. Air Force’s flagship innovation unit, AFWERX. VIA was selected out of more than 140 of the world’s leading technology providers and innovators competing in the same challenge category.

Expanding VIA’s partnership with the U.S. Air Force, the contract highlights the increasing demand for VIA’s AI for infrastructure application, JARVIS™. In the past year, JARVIS has supported over $200M in infrastructure maintenance and repair decisions at Al Udeid Air Base in Qatar. Tyndall AFB, located near Panama City, Florida, will immediately begin using VIA’s fast, secure, and intuitive JARVIS application to improve airfield maintenance and repair.

Tyndall AFB is the lead facility for the Air Force’s Installation of the Future program. After Hurricane Michael destroyed much of the air base in 2018, Congress directed that Tyndall AFB should be rebuilt to serve as a template for refurbishing and building U.S. air bases worldwide. Under the terms of its contract with VIA, Tyndall AFB, in partnership with the U.S. Air Force Civil Engineering Center (AFCEC), will also integrate JARVIS into the overall Installation of the Future system architecture so that the application will become available across the U.S. Air Force.

Major General Kimberly Crider, a recently retired two-star general from the U.S. Department of Defense (DOD) who served as Chief Data Officer for the U.S. Air Force until 2020, added: “Data is essential for DOD leadership to make mission-critical decisions and ensure that installation infrastructure remains safe, mission-ready, and comfortable for all personnel. As the base of the future, Tyndall and its evaluation is a logical step along the path to adopting JARVIS enterprise-wide. A DOD-wide adoption will ensure the Air Force can effectively and efficiently sustain essential infrastructure at all of its domestic and overseas air bases for decades to come.” 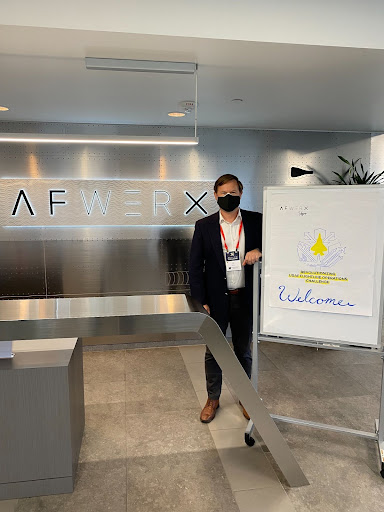 VIA’s Joe Babiec presented JARVIS to the U.S. Air Force at the invitation-only AFWERX Showcase in Nevada in September 2021.

Designed by airmen for airmen, the solution solves a critical pain point for the U.S. Air Force not resolved by other analytics tools. VIA’s Senior Vice President of Strategic Initiatives, Joe Babiec, who represented VIA in the challenge, explained: “JARVIS routinely saves Air Force civil engineers time and money. Before, they would spend days following complicated manual procedures to prepare a report for their leadership. JARVIS automates all of the Excel and data science tasks so that engineers can generate reports in minutes and with the same ease as using an application on a smartphone. Now they can focus on maintenance and repair work as they were trained, while leadership has the insights to inform strategic decisions about whether to expand, maintain, or replace billions of dollars of critical air base infrastructure.”

90% of the world’s data is trapped. VIA makes it accessible. Trusted by leading government agencies and clean energy companies around the globe, VIA’s secure, digital collaboration platform overcomes the most common barriers to AI: lack of data, data quality issues, and data privacy concerns. By bringing AI to data 100 times faster than alternatives and with the highest level of cybersecurity, VIA’s platform is the driving force to make communities of all kinds cleaner, safer, and more equitable. VIA is headquartered in Somerville, Massachusetts, with a technology center in Montreal, Quebec, and European offices in Denmark and Switzerland. For more information, please visit www.solvewithvia.com.

https://www.solvewithvia.com/wp-content/uploads/2021/11/TyndallAFB.png 627 1201 via /wp-content/uploads/2018/02/VIA-Logo-header-300x101.png via2021-11-04 08:30:292022-03-16 08:16:57U.S. Air Force Taps VIA for Data-Driven Infrastructure Decision-Making at Tyndall Air Force Base
Scroll to top
We use cookies on our website to give you the most relevant experience by remembering your preferences and repeat visits. By clicking “Accept All”, you consent to the use of ALL the cookies.
Accept All
Manage consent