Yes, we love chocolate, cheese, and clean mountain air.
That (alone), however, is not why VIA is spending so much time in Switzerland.
Switzerland is the leader in three areas core to VIA: clean energy, data privacy, and blockchain.

More than 190 countries around the world have pledged to reduce carbon emissions. Switzerland is one of the few that has legislation, a deadline, and active programs to move towards net zero. Not only is this commitment aligned with VIA’s mission, it enables VIA to actively support the clean energy transition and exactly where that transition is happening the fastest. As part of VIA’s commitment to energy and Switzerland, we’re pleased to have been admitted to the Association of Swiss Electrical Companies last week.

Arguably no country in the world has a stronger reputation for data privacy than Switzerland. The laws around data privacy continue to evolve and become stricter over time. By being aware of the leading edge of privacy regulations, VIA’s platform is in a position to support any jurisdiction.

Switzerland’s Crypto Valley is to blockchain what Silicon Valley is to software. With over 1,000 blockchain companies and one of the world’s first countries to enact crypto and blockchain legislation, Switzerland is an ideal location to lead blockchain initiatives. Earlier this year, VIA was admitted to the Swiss Blockchain Federation (see photo below). It’s in everyone’s interest to participate in an active innovation community that also has a clear regulatory framework. 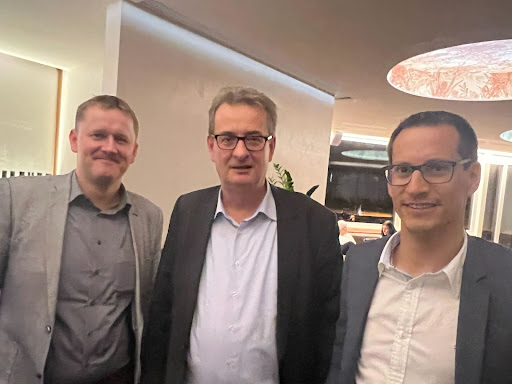 Pictured above at the general assembly of the Swiss Blockchain Federation in Zurich: Ray Neubauer, Expansion Manager at VIA, Markus Riner, Head of Digitalization at VSE (Swiss Association of Electricity Suppliers), and Dr. Fabian Streiff, Head of Economic Development Agency of the Canton of Zurich.

If you’re interested in hearing more about how and why we chose Switzerland as our European headquarters, you can watch this ten minute video with our CEO, Colin Gounden being interviewed by the Swiss Ambassador to the U.S.